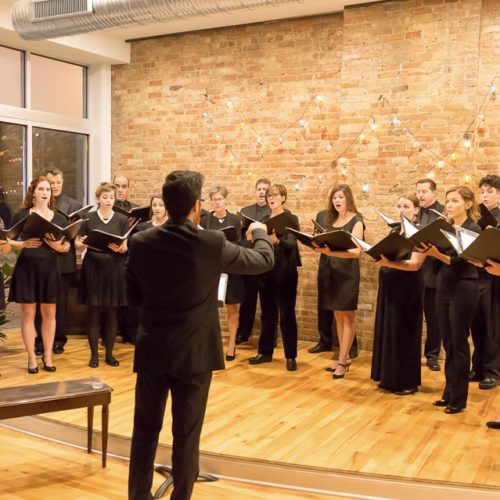 The mission of Harmonia is to present quality choral literature, primarily a cappella, in a way that is accessible to all audiences. Our goal is to ignite an interest in familiar and unfamiliar choral works from a broad spectrum of styles and time periods. Each presentation should be an emotional, exciting, educational, and inspirational experience for the singers and the audience. We present four major concert series annually, not including special outreach engagements. Another major component of our mission is education outreach and collaboration with young singers through workshops and concerts.

Harmonia was founded by Executive Director, Robert Pacillo, in 2006. It was in late 2005 that a small group of singers got together to present a special Advent concert at St. Lawrence Church in Buffalo. We were called the Gaudete Chamber Choir. A year later, Harmonia presented its premier concert at St. Andrew’s Episcopal Church in Buffalo. What began as an experimental ensemble evolved into one of Western New York’s most sought-after vocal groups. Noted for its innovative programming and stunning performances, Harmonia’s literature spans centuries of choral music, from Medieval chant to the present. Concerts are presented throughout Western New York in some of the area’s most beautiful acoustical spaces. Harmonia was named the Artvoice Best Vocal Ensemble in 2011.

In March 2015, Harmonia was proud to perform as part of A Cappella NEXT! at Carnegie Hall with the Elora Festival Singers and Le Choeur de Chambre du Quebec.

For its 10th Anniversary season, Harmonia commissioned Steven Sametz to compose Echo, text by Christina Rossetti. The new work was premiered on May 21, 2016, at the beautiful St. Joseph Cathedral in downtown Buffalo.

Please consider a gift to support Harmonia. Whenever you make a financial gift, purchase a season pass, or invest in program book advertising, you're sustaining choral music in its purest, loveliest form. Harmonia returns on your investment by keeping concert tickets modestly priced and accessible to anyone who appreciates choral music in our region.