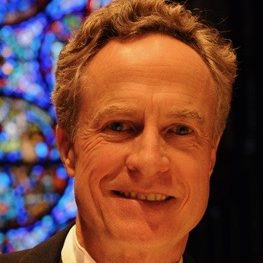 Robert Duerr holds degrees in organ performance and orchestral conducting from the University of Southern California where he studied organ with Cherry Rhodes and Ladd Thomas and conducting with Daniel Lewis. He also studied conducting at the Tanglewood Festival with Leonard Bernstein and Seiji Ozawa. Choral conducting study included work with Robert Shaw, Howard Swan, and Helmuth Rilling. Mr. Duerr was the first conductor to become a member of the Young Artist Development Program at the Metropolitan Opera.

In 1989, Mr. Duerr made his debut with the Metropolitan Opera with Gershwin’s Porgy and Bess. He has returned to the company in subsequent seasons. He has also conducted the opera companies of New York City Opera, the Wolf Trap Festival, Freiburg-im-Breisgau, Spoleto Festival USA, Bergen, Basel, Caracas, and Greater Buffalo Opera. He has conducted the contemporary music festival, Focus!, at The Juilliard School. Locally, Mr. Duerr has conducted the Buffalo Philharmonic Orchestra, the Buffalo Philharmonic Chorus, Greater Buffalo Opera, Amherst Symphony, Chautauqua Symphony, and Vocalis and Harmonia chamber choirs. Recently appointed music director of Harmonia, next weekend Mr. Duerr  makes his debut with the Buffalo Opera Unlimited conducting Cinderella, an opera he also conducted for Los Angeles Opera.

Mr. Duerr founded the Pasadena Chamber Orchestra in 1977. He also established the Pasadena Chamber Orchestra Chorus. The orchestra and chorus presented innovative programs specializing in Baroque and Classical repertoire and first performances of over 35 compositions, most which were commissioned. He was also Artistic Director of the Pasadena Festival of Composers. Mr. Duerr has received seven national awards from ASCAP for adventuresome programming of contemporary music.

A prize-winning organist, including the 1976 American Guild of Organists’ National Competition, Mr. Duerr has been director of music at All Saints’ Church, Pasadena, CA, and Great St. Mary’s—The University Church, Cambridge, UK. He has recently been appointed Canon Precentor at St. Paul’s Cathedral in Buffalo.

An advocate for the creative combination of music and theology, Fr. Robert is a theology graduate from Ridley Hall, Cambridge University and an ordained priest in the Church of England. He has preached and lectured in churches and colleges in the York Diocese, Cambridge, Oxford, and London, as well at the Episcopal Diocese of Western New York. He is a native of North Tonawanda.

Please consider a gift to support Harmonia. Whenever you purchase a season pass, make a financial gift, or invest in program book advertising, you're sustaining choral music in its purest, most loveliest form. Harmonia returns on your investment by keeping concert tickets modestly priced and accessible to anyone who appreciates choral music in our region.

The first event of our season is a concert about remembering.

A broader season of remembrance begins with All Saints’ Day (November 1), which celebrates all living saints, and All Souls’ Day (November 2), which commemorates those who have died. This virtual concert debuts on Remembrance Sunday, which ushers in Veterans Day later in the week. Both days honor those who served and died fighting past wars. This year we also remember those who have recently passed away from the coronavirus.

Our tribute includes music of Purcell, MacMillan, Ramsey, Park, Paulus, and Victoria-- anthems, motets, and madrigals of pain, death, sorrow, hope, and eternal life. May our gift of music comfort you, as often only inspired music can.